The melody of words

The men were building something important. You could see it in the firm conviction pounding each fresh-cut board into place. There were no women around so when a sweat-drenched trail wench in a lopsided cowboy hat rounded the corner, the men held the tools in the humid air and stared as if a Yeti  had just tap danced into the village.

“They are building a school,” my guide said. “Do you want to go in and sing?”

I had sung myself across this country for about a week. For someone who once was kicked out of the junior high honor choir, it was a startling musical achievement. The children did not care if my vocal range was trapped somewhere between a pond frog and a whooping crane.

They  longed for the melody of words.

“She is from USA,” Sangay said as we stepped inside. “She is going to sing.”

The men put down their tools and waited at the doorway. I ventured into a dark classroom where about 40 students of various ages stared with frozen expressions. Some of them wore faded uniforms. Some of them wore new ones. A runny nose here. A dirty fingernail there.

Huddled together with village dust still clinging to their clothes, these students represented the future of a country trying to decide how tradition and progress can be worn at the same time. Could you take giant leaps forward into the modern world and not send your culture stumbling to the ground?

On the wall, a jumbled mix of English words arranged in awkward sentences.

“Are these vocabulary words?” I asked the principal as he pulled one of his socks and straightened his goa to cover his knees.

“It is difficult,” he said. “Everyone speaks a different dialect. They learn to speak English slowly. Understanding what they are saying takes so much time.”

I cleared my throat. One of the builders blocked the sunlight drifting from a window.

“Head,” I said and pointed.

And so it went for long minutes on a hot afternoon in a country far removed from Oklahoma.  I desperately needed a drink since my water bottle had run dry about two hours before.  It took two rounds to get the point of “Itsy Bitsy Spider” across. Oklahoma was difficult to explain. I longed for a map. Another song. A slow goodbye. As I turned to leave, I felt a tugging, an unasked question. It was the camera. I had forgotten to take a photo. It was show and tell time.

“Thank you, madam,” the principal said. “They need to know English.”

The lunch bell rang as I cut through the field toward the footpath. Little boys ran in front of me and pointed to their heads, shoulders, knees and toes while stumbling over the words to a song I’d taught my children long ago.

They stopped at a water faucet to wash their hands and dangled their fingers in front of them in the “Itsy Bitsy” dance. On a nearby wall, faded backpacks held their lunches of yak cheese, rice and maybe a sliver of dried fish or pork fat. 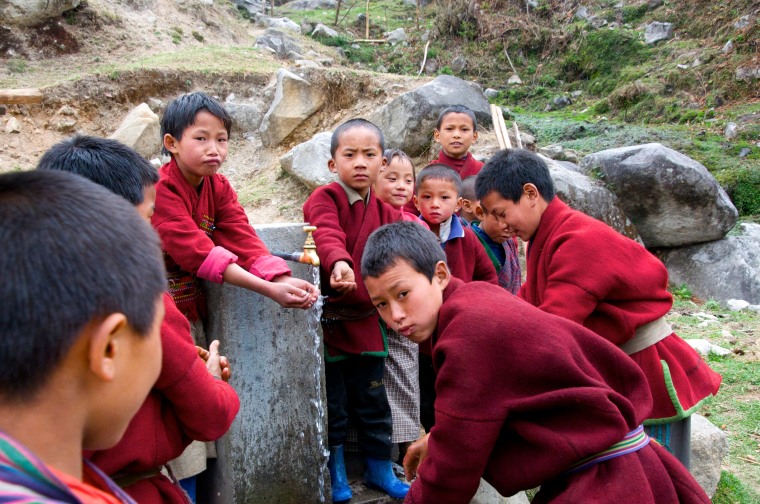 Change was coming to this dreamland. Strangers were within walking distance. I thought of this as I stepped over stones and lumber waiting to become the foundation of learning.

Just beyond the school, I found a lesson in love. Most every mother in America has put one on her refrigerator. In Bhutan, someone drew it on a rock.

There were no words. No words were needed.

Feel free to tell me what you think.