The schoolgirl dropped into the shade of a hut in the Namibian village and tugged at a broken seam on her shirt. Beside her sat the other girl glossed in otjize, a fragrant myrrh mask of ochre dust, fat and butter.  When the wind came, the girl in the traditional skirt swung her plaited headpiece of collected hair and hay so that the pom balls danced across her back.

Deep in Namibia, the Himba girls symbolized the ironic contrast of what may happen sometimes in places where a girl’s value is still measured by the dowry she might bring. I don’t know all of their story. I never will. My educated guess tells me the pretty girl may get the looks and the larger dowry. The plain girl may get more chances to go to school.

One girl walks barefoot across stubbled land or jumps into the back of a Toyota pickup with questionable brakes so she can reach an educated future. Another girl poses for photographs and stays in the village more often. Maybe, she becomes a wife or a mother too soon. Maybe, she regrets being the fairest of them all. Maybe, I am wrong. Maybe.

Cattle plodded through the bare ground in the distance as the village boys moved the matchstick livestock across land parched by the broken promise of rain. One day, both girls will wed by parental arrangement and step into womanhood by delivering her net worth in cattle to her family – a gift from the new husband.

Life here fluctuates between the ancient and the new. The women still bathe only by wrapping their bodies in a blanket and hovering over resin-rich smoke until beads of sweat drip down their skin. Yet a woman in a goatskin skirt will round the corner and arrange a village tour via her cell phone. 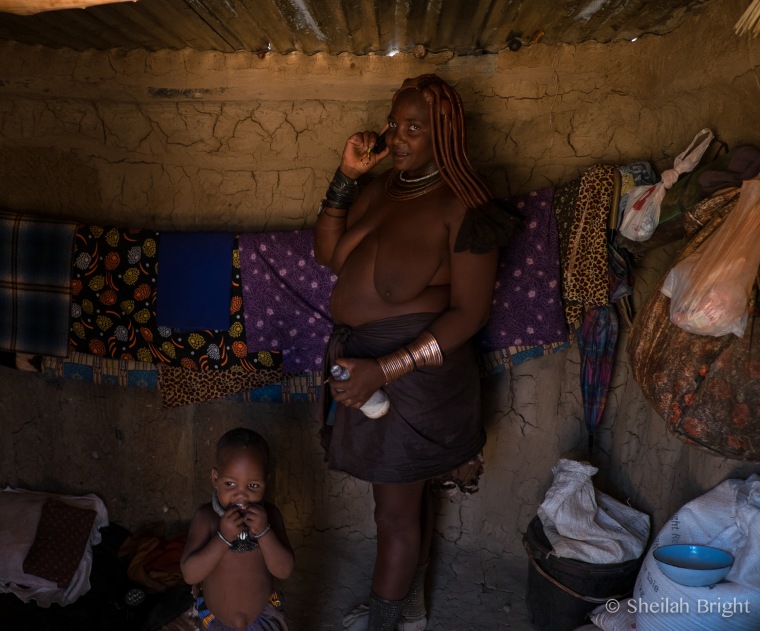 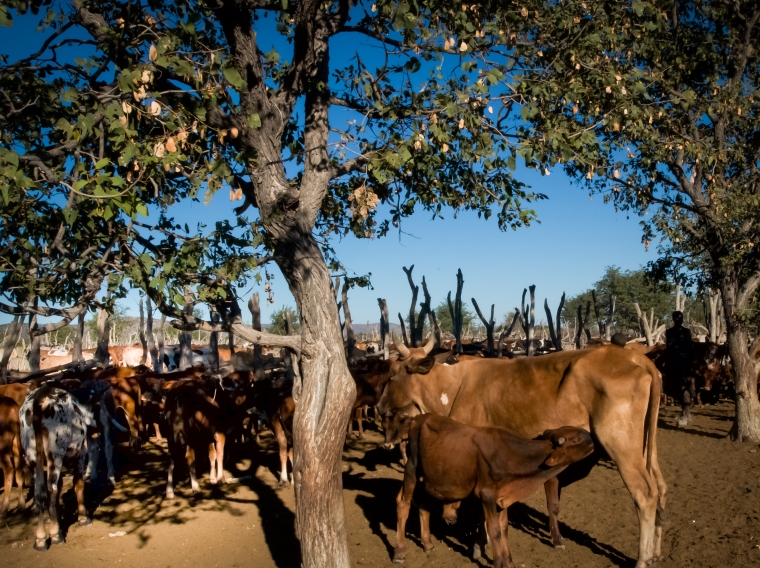 When the girl in the mismatched clothes looked away from the pretty girl with her body jewelry and red-velvet skin, the air between us felt burdened by something more than the heavy heat. She looked at me with dark eyes fringed by white. I noticed specks of yellow in the corners and wondered if she might have jaundice. She looked away and asked my name in a language I did not know.

Regan, a wide-grinned guide who later would reluctantly escort my friend and I to a local bar to see the other side of Namibia, translated her question as I looked to the commotion in the distance. Children kicked through the powdered soil sifted over the village every time the winds came. Some visitor had earlier brought green, blue and white balloons to the village, and it felt as if a technicolor cartoon had plopped into this world of brown. The children’s cheeks puffed as they blew and giggled and blew again.

“She wants to know how to spell it?” he said. “Your name. What are the letters?”

My trek pants hadn’t quite dried out from the sink washing the night before. When I knelt beside her, the village silt soaked into the damp spots on my knees and slipped into the cuffs. Later that night when I would return to my modest room with its slight bug problem, I would pour some of the memory into a bag so that if the dirt made it through customs, I could toss it into the Oklahoma wind and remember the girls once again.

If you travel with an open heart as I think one must, you will find yourself here in a moment like this one – unscripted by itinerary and shaded by something so universally important that long after the seasons change and the years pile on, you will remember these days when kindness mattered.

I brushed away pebbles and a cigarette butt to clear our slate and dipped my finger into the dirt to write “S.” She picked up a stick, adjusted her position and surprised me by writing “S” on a slate of her own. Then an “h” and an “e” and an “i”. Then the  “l” closed in too tight on the “i” which made her cringe until I nodded and placed my hand on her shoulder until she added the “a” then an eager “h.”

Pride smiled back at me with such tenderness that the dogs in the distance and the occasional goat and the noisy boys with the balloons drifted somewhere beyond our moment.

And the “g” danced just a little with a flourish of a tail, and then she handed me the stick. I hesitated just a moment until she put her hand over mine and led the trace.  We laughed so quietly that it drowned out the jingle-jangle scurry of the Himba women gathering their trinkets to spread across the ground – an impromptu souvenir shop with persuasive saleswomen.

The “g” with the dancing tail sat there alone until I gently added the “h” and its final sidekick “t.”

Never had my name been written so beautifully.

I would have loved to take the masterpiece home, maybe frame it or lift it from a drawer a decade from now and marvel at the warmth a memory can bring. But she had been the one with the smarter plan – the one who did more than drop letters into the dirt. She was the teacher of this lesson of cultural understanding.

I watched her walk away. And my name went with her.

Feel free to tell me what you think.